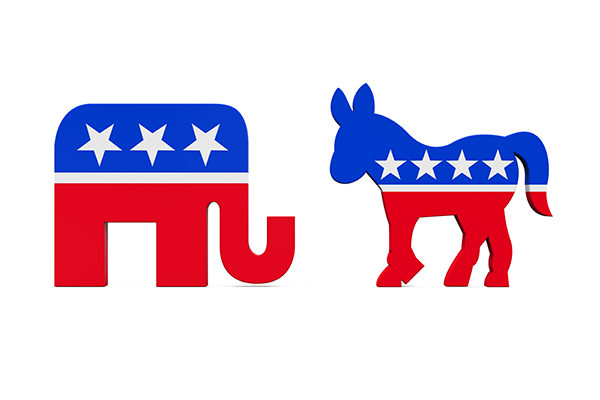 In June, PQ Media projected that political media buying could exceed $8 billion in 2020, possibly as high as $8.5 billion.  In Part 2 of the blog post, PQ Media reviews recent issues, events and state of the economy and provides insights into the 2020 political ad forecast.

Although there are numerous issues that might decide the election, three have come to the forefront over the past few weeks: Immigration, Impeachment, and the Economy. This is not to say that there are other issues that might be a factor in persuading some voters, like positions on gun control, climate change, and student debt, among others. However, these three issues have dominated news cycles, particularly Trump’s reaction to the events and the Democratic candidates’ spin on the events and Trump’s rhetoric. Since last week’s blog was published, two more Democratic presidential candidates have dropped out of the race: Jay Inslee and Seth Moulton. In addition, former Illinois Representative Joe Walsh tossed his hat into the ring last night to challenge Trump for the Republican nomination. He joins Weld, making it a three-person race (still not enough even for a basketball team).

Around the time of the second debate, immigration centers dominated the news after numerous politicians visited the border and were appalled by the conditions, with many Democratic candidates calling them unfit for humans. This required the Republicans to defend their detention and border wall policies while seeing drops in approval ratings.

But the debate over the immigration centers dissipated after Trump called out the most vocal Democratic politicians to challenge the Republican administration, known as the “The Squad” – four women of color in the House of Representatives. Some pundits believe his racist tweets were done on purpose to move the news cycle off the immigration centers (as well as impeachment—see below). Thus, the immigration centers were replaced on news programs by complaints of racism, which expanded when chants of “Send Her Back” were heard at a Trump rally and Trump attacking two African American male politicians.

The issue of immigration came to a peak after the domestic terrorism attacks by white supremacists, especially in El Paso where the shooter admitted that he targeted Hispanics. While some would include gun control as a fourth major issue after the mass shootings on the weekend of Aug. 3-4, unfortunately history has shown that nothing gets done despite the volume of rhetoric. For example, no changes to gun laws were made after the shootings at Sandy Hook and Parkland. As is, Congress went on vacation the following day of the shootings, despite pleas to Mitch McConnell that went unheard that demanded a return of Congress to Washington, DC to vote on bi-partisan bills relating to stronger background checks. Gun control could overtake immigration as a major issue in the weeks leading up to the elections if there are more mass shootings that are deemed particularly disgusting and the Trump White House dismisses calls to ban certain weapons used in the attacks.

Running concurrent on news cycles to the immigration issue was impeachment, fueled by Robert Mueller’s testimony before two Congressional committees on July 24. In advance, most observers were not expecting any major new insights into the Trump administration, which proved to be true. Because Mueller’s presentation style seemed disjointed, each political party spun the hearings differently. The Republicans continued to call for stoppage of the Russian intervention and concentrate on other domestic policies, like the border wall. Meanwhile, the Democrats called for continued efforts to examine Trump’s relationship with Russia and the 10 instances of obstruction of justice cited in the Mueller report. In the weeks since the Mueller hearing, the number of Democratic House members calling for impeachment hearings has increased substantially, spurred by Mitch McConnell’s inaction of tabling two 2020 election security bills after Mueller went out of his way to state that Russian interference is a certainty in the 2020 elections. As of Aug. 15, the Democrats were two votes short of calling for impeachment hearings.

As stated in the July blogs, the Democrats are running a fine line here. While they all agree that an impeachment hearing should be called, they don’t want to alienate the undecided voter if the findings are inconclusive, allowing Trump to be painted as a martyr to the “witch hunt,” regardless that Mueller confirmed that his investigation was not a witch hunt because it found Russian interference in the 2016 elections. However, Democrats are also afraid of alienating their core constituency, many of whom are frustrated that no impeachment hearings have yet to be scheduled. If the Democrats wait too long, some of the loyal voters will stay home on election day due to the inaction. Particularly worrisome to the Democrats is that many of the loyal voters frustrated by the inaction are minority voters.

Although immigration and impeachment are important issues, history has shown that most elections turn on the economy, particularly for first-term presidents if there is a recession during the election year. The most recent example of a first-term president being voted out of office was George H.W. Bush in 1992. One year earlier, he had approval ratings skyrocket after the extremely successful conclusion to the 1991 Persian Gulf War. No one thought that a Democratic candidate had a chance in 1992, particularly a little-known governor from Arkansas. Then, the economy tanked.

Currently, the US is in the longest economic recovery in its history, reaching 121 months in July 2019, breaking the former record held during the 1991-2001 period. Many economists don’t believe that a recession will occur in 2020, but there have been warnings. In April, the International Monetary Fund revised their global economic growth downward for 2019 and 2020 due to the ongoing tariff battles, particularly between the US and China. Wall Street stocks have registered some of their deepest drops of the year in recent weeks due to news of China’s economic struggles as a result of the tariffs, as well as the bond inversion curve in which the yield of 10-year Treasuries dropped below 2-year Securities, which occurred for the first time since 2005 on August 14. US data on jobs, manufacturing, and shipping and GDP growth in 2Q19 show a slowdown after strong 2018 results. Half of the economists surveyed separately by three organizations—The Wall Street Journal, Zillow and the National Association of Business Economists—predict a recession starting in late 2019 or 2020. In August 2019, Morgan Stanley increased their November 2018 prediction of a 30% chance of recession, to an almost certainty of a recession within three financial quarters if the US goes forward in instituting a 25% increase in tariffs with China within the next four-to-six months. Goldman Sachs warned a few days later that a recession is an extreme possibility if a US-China trade deal isn’t reached by the 2020 elections.

Where Does Radio Fit In? Any Changes to Earlier Predictions?

Based on the 2Q19 FEC filings, media buying has been primarily limited to television and digital media, although more than 10 other media platforms have received an influx of spending. Television is dominant among the candidates who can afford it—mainly the candidates who raised over $10 million during 2Q19. However, half of the candidates that raised less than $3 million are in debt because they purchased television as well. The other half of the candidates with coffers less than $3 million are relying primarily on digital media because of the lower price points, although many pundits believe that the ROI is harder to determine than television. The other media, such as direct mail and radio, are receiving their usual share of budgets in the year before the elections. Yet, many media operators in these platforms, like radio station and billboard owners, have reported that 2019 political media buying is exceeding 2015 revenues.

Despite the posturing on immigration and the Mueller report, PQ Media doesn’t think that either issue has yet to move the pendulum enough to cause a revision to the overall political media buying projection made in July of $8.33 billion. We also still believe that reaching multicultural audiences during the campaign will be the primary trend driving an increase in radio advertising in 2020.

More difficult to ascertain is what happens if there is a recession. Historically, overall advertising & marketing plummets during a recession, such as falling almost by double-digit rates in 2008 and 2009. But by the same token, historically. political media buying has risen every four years since 1972, including years the country was mired in a recession. PQ Media is leaning towards the latter scenario because of President Trump. He has invigorated his loyal constituency that have helped spur record-breaking fundraising totals already in 2019. Concurrently, the opposition has been invigorated by his controversial rhetoric and policies, and the aggregated monies raised by the Democratic candidates has also broken records for the year before the federal election. Furthermore, there are more Senate seats up for grabs in 2020 than in 2018, and both parties are expected to break records here as well. For example, Amy McGrath, the leading Democratic candidate for the Kentucky seat, saw a significant influx of dollars from outside the state in early August after Mitch McConnell tabled the 2020 election security bills and refused to delay the Senate vacation to vote on the gun control legislation.

What is becoming clear since I last posted to the RAB blog is the importance of Pennsylvania, Wisconsin and Michigan in the 2020 presidential elections, the three states Trump carried to win the electoral college in 2016 that will also be a factor in 2020. Every projection site has them touted as being “too close to call.” Other states have received that moniker as well, but there are disagreements about the prediction sites as to whether one party has a slight edge already. Among the states in this category are Florida, North Carolina, Arizona, Nevada, Georgia, Iowa, Minnesota and Maine. The wildcards might be Texas, Ohio, Virginia and Colorado, particularly the former if O’Rourke is on the ticket. Radio will do well in these 15 states, particularly in the more rural areas, like the Appalachian regions of Pennsylvania, Georgia and North Carolina, as well the northern regions of Michigan, Wisconsin and Minnesota. The overall total for political media buying might jump if all 15 states stay in play as there are dozens of large cities in these states with higher CPM rates, like Philadelphia, Milwaukee, Detroit, Miami, Phoenix, Atlanta, Minneapolis, Dallas, Cleveland, Denver and Washington, DC (reaching northern Virginia voters).

That said, this is a battle about electoral votes, not popular votes. Most pundits predict that the Democratic candidate will exceed Clinton’s three million difference in 2016 in the popular vote, possibly winning by as much as 10 million votes. (Note: When the 7.5 million independent votes in 2016 are added to Clinton’s total, Trump lost the popular vote by nearly ten million votes.) However, not one prediction site has yet to forecast a Democratic total over the 270 electoral votes needed to win the election, as they did overwhelmingly for Clinton in the week leading up to the 2016 election. The Democrats are currently leading in electoral votes in “safe” states because of the inclusion of California, New York and Illinois with a combined 104 electoral votes, whereas the three largest states currently safe for Republicans are Indiana, Tennessee and Missouri with only a combined 32 electoral votes.