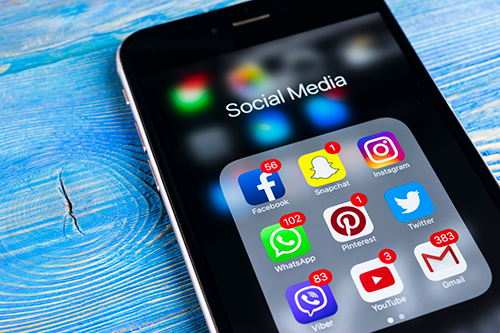 Since its inception, social media has been a much-discussed digital platform – especially in radio circles. The low cost of entry, the ease of interaction and its widespread popularity has made for a great opportunity for radio brands to connect with audiences in ways that were once not even possible.

In recent weeks, we’re learning more about the true toll of social media networks on our privacy and personal information. If we didn’t realize it before, we do now: there’s a cost to social media. Mark Zuckerberg did not provide us with a conduit to our friends, families, and listeners as a public service. He’s been monetizing our data. And we’ve been gladly checking off the “accept terms and conditions” box as we scroll through our news feeds.

But yet, they seem to keep coming back every day. Perhaps some people will get off the grid, but a look at Facebook – even after Zuckerberg’s testimony – shows a social network that looks and feels pretty much the same.

Weddings, anniversaries, travel, memes, and political ranting – it’s all there.

For radio brands, Facebook continues to present a dynamic opportunity. Unlike station websites that are more static and less interactive, Facebook, Instagram, Twitter and Snapchat are examples of platforms where listeners and stations can hang out, chat with each other, and connect in unique ways that were not possible just a few short years ago.

Radio fans aren’t expecting miracles when they post something to a station or DJ on Facebook. Of course, they hope to earn a “like” or as a bonus, a comment, from someone on the on-air staff. But most of the time, they’re satisfied with simply being able to post a thought or opinion, a reaction to a song, a morning show benchmark bit, an artist, or even polls and questions of the day.

This ability to interact with audiences is one of radio’s least expensive and most effective attributes. But too often, on-air staff members are not taught or trained in the fine art of “socializing” with fans.

One of the things we heard a lot in both focus and listener advisory groups is the power and impact of social acknowledgment. This was something that Lori Lewis, our former social media guru, regularly preached.

Real listeners tell us being acknowledged socially is the equivalent of a “digital autograph.” Those who tell the stories of these encounters usually talk about how they share the experience socially, and how meaningful it is to them.

We all know about the impact of celebrity “brushes with fame.” Running into a movie or TV star, or famous athlete in public isn’t just memorable – it leaves an indelible impression. People remember it for years – even decades. And these are stories they tell again and again.

To be able to create those types of moments for radio listeners – with just a few keystrokes or texts – provides talent with an opportune way to generate loyalty and buzz.

This is something we’ve been preaching at Jacobs Media for many years because we know that anecdotally, it works. The idea is that every listener matters, and that acknowledgment is a critical aspect of a station (or a DJ’s) marketing efforts.

And yet, in so many conversations with talent, the argument goes like this:

“We’re very busy doing our shows, and there’s just not enough time to ‘like’ or write a comment to everyone.”

While some programmers would concur with talent that “the mothership” – a station’s air sound – is of most importance, the need for balance is important.

So, how to quantify this relationship, and even make the connection between social connections and increases in fan engagement and actual listening?

That was the dilemma we faced a few years ago, and so, we developed a simple, even elegant agree/disagree statement for our nationwide Techsurvey questionnaire.

“I listen more to radio stations that interact with me socially.”

And we now track this question – and the trajectory is spectacular. With each passing year, social acknowledgment rises in importance on the radio.

In our newest Techsurvey – where 560+ radio stations produced 64,000+ respondents – we see the dramatic ramp-up: 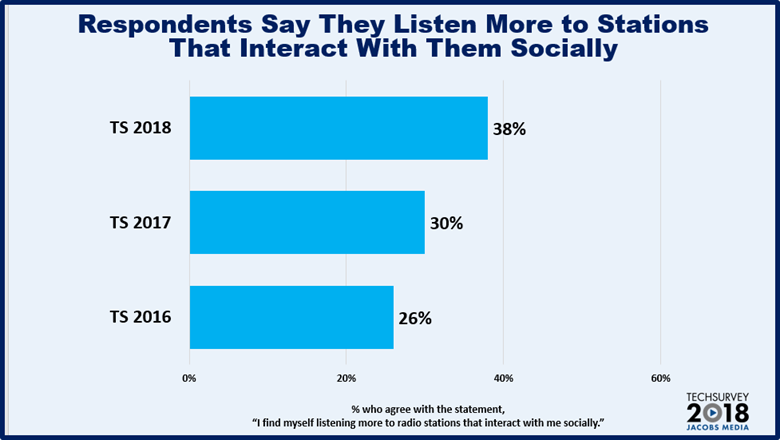 In Techsurvey 2018, nearly four in ten (38%) agree with the statement, underscoring the importance of social media acknowledgment by radio personalities.

Which groups are most impacted by that digital sign of respect?

Women, Millennials, and ethnic minorities – Hispanics, African-Americans, and Asian – all trend higher on this agree/disagree scale.

But all the numbers across the board – whether we’re looking at demographics or formats – show the value of training talent about how to best (and most efficiently) acknowledge fans in the social ecosphere – and explaining why it matters. And as the chart shows, the trend line is heading “north.”

A number of years ago at one of our Jacobs Media Summits, we were fortunate to have Dateline NBC’s Josh Mankiewicz. Josh is a talent correspondent, but is also an engaging, gregarious guy. He makes it a point to interact with pretty much everyone who reaches out to him socially.

So, as you might imagine, he’s a pretty busy guy. On Twitter, he now has more than 30,000 engaged followers. And part of the reason is that he’s an acknowledgment animal – despite not owning a smartphone.

When he spoke to our group in 2013, he held up his flip phone to make the point that connecting with his viewers isn’t a hi-tech endeavor. It just takes hard work.

His following on Twitter is very active, punctuated by the “Dateline Divs,” a group of rabid, core followers who are clearly part of his brand success. They formed organically as Josh Mankiewicz/NBC Dateline fans, and they connect and kibitz with one another.

During his Summit speech, Josh was asked how he has the ability to connect with hundreds and hundreds of fans every day on Twitter, while he’s doing his day job. He shrugged and said, “I just make the time.”

Understanding the importance of audience interactivity is the first step in making the commitment to always acknowledge.

As Lori Lewis continues to remind us, “We define our image every day by how we behave in the social space.”