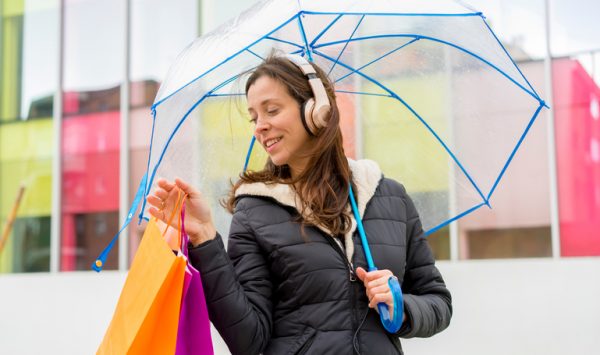 Today’s uncertainty in the economic landscape is top of mind among consumers and businesses alike. This uncertainty is impacting everyone – including those who are considered affluent.

According to the YouGov Affluent Perspective 2019 Global Survey, only 44% of respondents stated that they were extremely/very confident in the strength of their personal economy. Perhaps that is why 76% state that they are making fewer and more meaningful purchases.

Who is the affluent consumer? An internet search on the definition will deliver income levels of varying amounts. There is one distinctive characteristic of the affluent consumer – they yield an incredible buying power. For this post, we will define “affluent” as those whose household income exceeds $100,000 annually, which is substantially greater than the $63,179 median, as released by the U.S. Census.

Other than yielding incredible buying power, affluent consumers are users of technology. They also spend time with media – both traditional and digital, according to a GlobalWebIndex audience report.

Technology matters to this group – they are 76% more likely than the U.S. population to own any type of smart device.* Despite their “smart” ownership, only 8% agree that they like to have a lot of gadgets and 21% believe that technology makes their life more organized.

Like all consumers, they are becoming much more concerned with online privacy. Based on findings from the GlobalWebIndex audience report, 63% of affluent consumers have used a private browsing window and 56% have used some type of ad blocker. Nearly half of the respondents that have used ad blockers believe that there are too many ads, they are annoying, irrelevant and too intrusive.

These may be just some of the reasons that this group has begun to “unplug.” More than 40% of high-income consumers globally have removed social media apps from their phone and have also reduced their amount of TV viewing.

Upon reading this post, reaching this consumer might appear to be difficult. However, note that traditional media still matters to this group – specifically, Radio. Affluent consumers spend nearly one and a half hours listening to Radio daily, according to the report. When it comes to reach, Radio is – of course – the top vehicle to use. 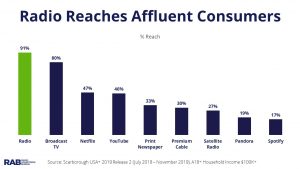 As noted in previous posts, relationships and human interaction matter to consumers and Radio, with its personal and emotional connections, delivers these things. To these consumers, Radio is informative about new products and services (32%) and about bargains (29%). Unlike internet ads, nearly one-quarter of affluent consumers believe that Radio ads are amusing.*

Radio is the top reach medium to target adults whose household income exceeds $100K annually. These consumers are highly sought after and targeted by brands across numerous categories. When trying to reach these consumers, Radio is a medium that should be included as part of any campaign. It’s the medium that brands can’t afford not to include.