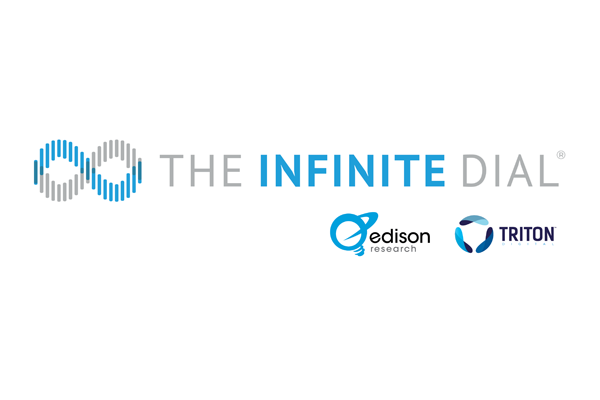 The most telling image from The Infinite Dial 2020 presentation is a screenshot of our presenters, Edison Research SVP Tom Webster and Triton Digital President of Market Development John Rosso, leading the webcast with over 1,500 attendees from their respective homes. No one could have anticipated that our setup would be driven by social distancing precautions. Now seems like a most appropriate time to talk about the most recent findings on the “infinite dial” of podcasting, digital, audio, radio and social media that connect us all.

The Infinite Dial® 2020 marks the latest annual report in a series dating back 22 years, covering consumer usage of media and technology, while also tracking new media as they develop. Here are the highlights:

Podcasting Reaches 100 Million Monthly Listeners
Last year’s Infinite Dial podcasting highlight showed that 51% of all Americans age 12+ had ever listened to a podcast (up to 55% in this year’s study). This year’s podcasting milestone is that approximately 104 million people in the U.S. have listened to a podcast in the last month, (37% of the 12+ population, up from last year’s 32%). Podcasting continues to show strong year-over-year growth. Thirty-nine percent of men and 36% of women are monthly podcast listeners. With massive numbers of podcast choices available, podcasters are stepping up with content directly related to the ongoing COVID-19 crisis. 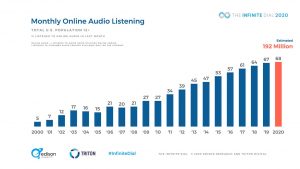 Portable Device Ownership Flat; Radio Receivers in Home Down
Ownership of many portable devices has flattened, as smartphones (owned by 85% of those in the U.S. 12+), tablets (owned by 53%) and  smartwatches  (owned by 17%) exhibited no real increases in ownership in 2020.

Households Own Multiple Smart Speakers
The online listening device that continues to grow? Smart speakers. Twenty-seven percent of the 12+ population the U.S. (76 million) own a smart speaker, up from 23% last year. Nearly one-third of smart speaker owners (32%) have three devices in their homes, while 23% have two devices and 45% have one. The average number of the devices in smart speaker households has grown from 1.7 in 2018 to 2.2 in 2020, so we see growth coming from households owning more than one of the devices.  Incidentally, 68% of American homes own a traditional radio receiver, and smart speaker adoption appears to be growing at the same rate in radio and non-radio households. 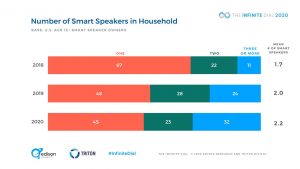 Voice-Operated Assistants
Between smart speakers, smartphones and other voice tech, it stands to reason that 62% of those in the U.S. age 12+ use some type of voice  assistant. Our comfort levels are increasing, as voice technology has become more available.

Radio is Audio Used Most Often In Car
As noted above, 68% of Americans have a radio in their home, but we know that virtually every automobile is equipped with a radio. Eighty-one percent of those in the U.S. 12+ currently ever use the radio in car, and 50% say that radio is the audio source used most often when they are in their cars. Radio is facing competition in-car, though, and as technologies converge, 45% of the U.S. 12+ population has now listened to online audio in their car through a cell phone. Radio continues to serve on the front lines as a local information source, so it is no surprise that it remains a top choice in car. 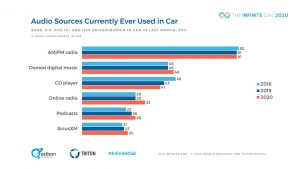 As Americans continue to practice social distancing, these technologies will be tested, as we continue to connect in the weeks and months to come.  What’s important to remember is that these devices and media outlets don’t exist without the humans powering them, so we look forward to seeing the difference we can make through all the outlets on the “infinite dial.”

The Infinite Dial® 2020 uses the gold standard of nationally representative survey research – a random probability telephone sample, comprised of both mobile phones and landlines – of all Americans ages 12 and older. For the 2020 study, 1,502 telephone surveys were conducted.