As states across the country locked down, it created massive shifts in behaviors and routines. We’ve all read about studies that have analyzed the shifts and the overall mood by people across the country. One thing was evident among all these studies – people are missing what they did every day.

States are slowly reopening across the country. Does that mean that everything will go back to normal? Probably not, but that doesn’t mean that what people want and missed has changed.

People are looking forward to going to restaurants, shopping, seeing family and more. Believe it or not, people are missing their commute to work.

CarInsurance.org surveyed over 1,000 people mid-April about driving during COVID-19. Before the pandemic, those respondents who worked full time spent nearly five hours commuting each week (Some of you who live in major cities are probably wishing your weekly commute used to be that short). You may find it odd, but those adults who were employed full time or who were self-employed and now working remotely, 45% are missing their commute to and from work.

What? Why would anyone miss commuting? Perhaps it is not so much about the commute but more about what they did during the commute. With the ability to select multiple options, the thing missed most was audio in some form – listening to music, podcasts/audiobooks and talk radio. 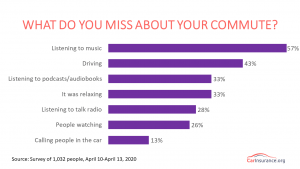 It’s no surprise that there is a great desire for everything to be the way it used to be, yet we have also adapted. We’ve found new ways to meet, communicate, celebrate and explore and many have also begun to incorporate some of the things they have missed – specifically, radio.

Despite changes in workplace locations, radio has a great story. Offering music, information and entertainment has always been a value that radio has delivered. It is a part of a person’s day and their commute. So, if the new commute is going from their bedroom to their new makeshift office, they are tuning in to radio.

Radio has incredible reach. It connects emotionally. It’s an important part of a listener’s day. Radio has always had a great story and it still does.

Do you have a great story about radio? We’d love to hear it.